What: Union Maj. Gen. offers these three enslaved gentlemen protection from orders made by Virginia militia (Confederate) colonel, C. Mallory, who sent three of his enslaved men to Sewell’s Point in Norfolk to help in the construction of Confederate gun emplacements.

Excerpt: The day before this historic event, Virginia seceded (withdrew its membership) from the Union. The Union Major General Butler as of May 22nd became the new Fort Monroe Commander. It was the Virginia Militia Colonel, C. Mallory, who sent three of his enslaved men to Sewell’s Point in Norfolk to help in the construction of Confederate gun emplacements. We know the names of the three men today through oral history as Frank Baker, James Townsend, and Shepard Mallory.

Having heard they would be sent further south to help construct other gun emplacements, on the evening of May 23rd, 1861, these three courageous men made their way across Hampton Roads in a rowboat to Fort Monroe seeking sanctuary. It was the Fugitive Slave Act of 1850 that required any enslaved person caught seeking freedom to be immediately returned to their “owner,” regardless if they were caught in a free state or not, that Maj. Gen Butler was up against. The Major General Butler instead decided to offer these gentlemen protection as confiscated “contraband” in order to deny the southern forces their labor. The bravery of Baker, Townsend, and Mallory resulting in Butler’s decision would lead to the Confiscation Acts, Emancipation Proclamation, and ultimately the 13th Amendment to the United States Constitution forever ending slavery in the United States. 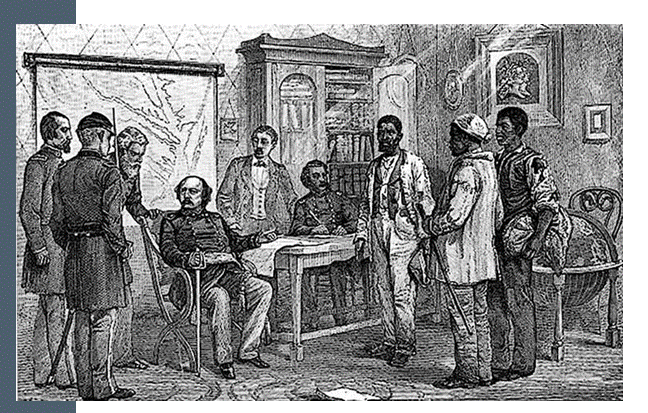