Just a reminder that there is no school on Monday, November 12th  in observation of Veteran’s Day.  Please see below information about  Veteran’s Day programs at The Jones Library on November 10th and on the North Common in Amherst on November 11th.

Amherst, MA – The Jones Library marks the 100th anniversary of Veterans Day with a special program presented by Libby and Ed Klekowski on Saturday, November 10, 2018 at 2:30 pm as they share their experiences in exploring some of the battlefields from World War I.

This Veterans Day marks the 100th anniversary of the end of World War I. Originally called Armistice Day, this November holiday was created to mark the signing of the agreement that ended World War I at 11:00 A.M., November 11, 1918. It became a federal holiday in 1938 and was renamed Veterans Day in 1954.

Libby and Ed Klekowski have been researching World War I for over ten years and have spent many hours walking through the battlefields of Verdun, the Meuse Argonne, and St Mihiel. Their work has resulted in three books and they have produced two WWI documentaries for public television. This special lecture will take the audience for a walk “on the wild side”, where the dross of war still litters the woods.

Books will be available for purchase and signing.

Free and open to the public.  For more information about this event, please contact Janet Ryan at 413/259-3223. 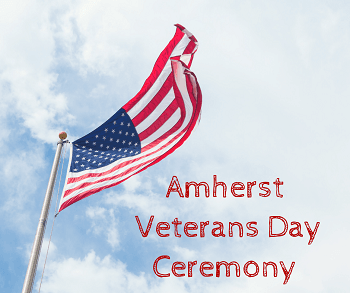 The 100th Anniversary Of The WWI Armistice. Commemorate Veterans Day with a flag presentation with veterans from Amherst Veterans of Foreign Wars and American Legion posts. Steven J. Connor, the Director of Central Hampshire Veterans’ Services, will provide an update on veteran programs and events in Amherst and the Pioneer Valley. This event is free and the public is encouraged to attend.

Location: North Common in front of Town Hall at the flag poles

Details: The ceremony will begin at 11 a.m. on the North Common in front of Town Hall. Speeches will be held inside a location TBA (likely Bangs or VFW), in the case of inclement weather.